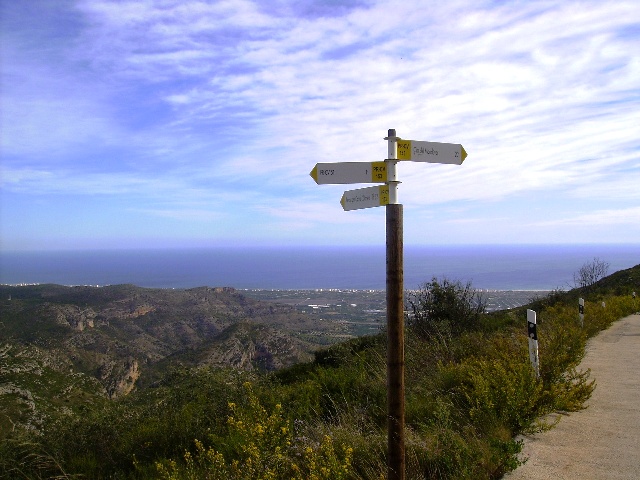 Yes, yes, I know, the previous epistle stated that this column from your beloved scribe was going to be about summer and winter, but I am nothing if not fickle and I promised she who must be obeyed (that’s Sally of course, not my beloved better other half) that I had a little something up my sleeve, so here it is! Be patient, all shall be revealed.

The fact of the matter is that we have lived here in Gandia for just over our first year (pause for the applause and fanfare of trumpets) and I thought it might be interesting for you all to get a feel for how the process has played out and how your journey may be similar as you embark on this great adventure.

Like many of you I’m sure, we retired before moving out to Spain to enjoy some sun – well a lot of sun actually, to make new friends of similar interests and ambitions and to basically have a complete break from the British way of life which had dulled in its shine over the past couple of decades. We were very much the norm, as we have learned, in as much as we had limits to our resources, so we sold up in the UK and used those funds to purchase our new home in Spain, leaving enough ‘profit’ to cover initial expenses and put a comfort cushion in the bank to back up our pensions, private and state. Why do I mention this? Well because you will find that the ‘non lucrative visas’ that you require to live here now do actually require you to prove that you can support yourselves ‘appropriately.’ Although you can still live comfortably on less income than you needed in the UK, the Spanish government require assurance that you will not become a burden. But don’t panic. Ask the question and the ‘For Sale by Sally in Spain’ team will put you in touch with trusted advisors who will make everything crystal clear. Although it took several months, our Spanish Lawyer – who speaks better English than we do, by the way – removed all the worry from the process and was very approachable. So, a year in and we are both full blown Spanish Residents with TIE’s and NIE’s. That makes a DRAMATIC difference to everything here.

We are still waiting for our SIPs (Spanish National Health cards) having received the paperwork from the British NHS yonks ago. But that is the slow-moving bureaucracy in lumbering operation! The Spanish Hospitals are, in general, superb. The GP services no worse than in the UK, but again, there are ways to speed up the efficiency! Talking medication, you will find that the price of prescription medication is often seventy-five per cent cheaper here and many medications are available over the counter without prescription. That happens to include the heart condition meds for my wife – not just headache tablets!

Some of you may have heard of the Gota Fria. If you haven’t, you soon will around the first September/October that you live here. This weather phenomenon is quite literally unbelievable! It is rain, but probably as you have never seen it before! We are wonderfully spoiled every day with a ten kilometre view up the valley until one day when we could suddenly no longer see the mountains in the distance. Then this wall of solid grey could be seen marching down the valley obliterating everything from sight. The Gota Fria was coming! The ‘grey’ was a solid wall of rain which, when it hit us, meant that we couldn’t see more than twenty metres. It lasted three days! It turned all approaches to the villa into a full-blown waterfall in less than an hour. But hey! We didn’t have to water a single plant in the garden for ages! It is a cleansing. It brings new substance to the hard soil beneath us and means that water is cheap as chips here!

Climate change is making its mark here as anywhere else. This year saw the wettest spring since the 1920’s before the Sahara dust arrived to turn everything orange. It does that! So those of us who had been busily repainting our white adobes had to do it all again unless we were lucky and managed to get rid of most of it with jet washers, relying on the return of the sun to ‘bleach’ out the remaining stains ….. which in general it has already succeeded in doing.

I may have said before that this area is very Spanish and less ‘touristy’ than further south. To be accurate, there are many tourists here during the summer months, but they are predominantly Spanish from Madrid. Having said that, we really are blessed with a wonderful mix of British, Dutch, Scandinavian, French, German, American, Belgian and Italian ex Patriots scattered throughout the Gandia region, creating a super melting pot of cultures, languages and customs, generally underpinned by the prevalence of English as a first, second or third language and helping us Brits to immerse ourselves as shallowly or deeply as we wish. We, certainly, have quickly made an array of new friends including Spanish neighbours and even tradespeople. It only takes a little effort to really expand your circle here! It really isn’t that unusual to find that we have half a dozen social events to which we have been invited, all in one week. As they say, once retired, it is difficult to figure out how one would ever have the time for work! That certainly is the case here in this beautiful area of La Safor!

Post Script:  Just in case any of you were worried by the reference to the wet weather, it has been the usual wall to wall sunshine ever since and yes we are somewhat walnut coloured with practically zero sun bathing. Most important to look after your skin!

Part 2 - Hello Spain!As planned, we arrived after a seven-and-a-half-hour drive along motorways that shame our own, at our hotel in Denia. A charming little place that we can honestly recommend. Lovely staff (not all English speaking), comfortable accommodation, realistically priced and breakfast in their garden terrace is just a top treat! But again, I get...

Part 5: So, what’s it like to retire to Gandia Spain?Hello again! So, from a pair of Retirees to all of you considering making Spain your retirement destination, you may be interested in our findings since we arrived here post Brexit. First, you really do need an effective, efficient local Lawyer. Once more, the 'For Sale By Sally in Spain' team can...

Part 1: In the Beginning – The Journey that took us to Gandia (The Northern Costa Blanca - Costa Azahar) “Gandia? That’s in India, isn’t it?” Oh hi! Sorry, I’m getting ahead of myself. Allow me to explain. Y’see we, that’s my lovely wife and I, had been looking at properties in Spain for over two years as we ap...